An AUCOTEC solution that closely links engineering to PdM

The advantages at a glance 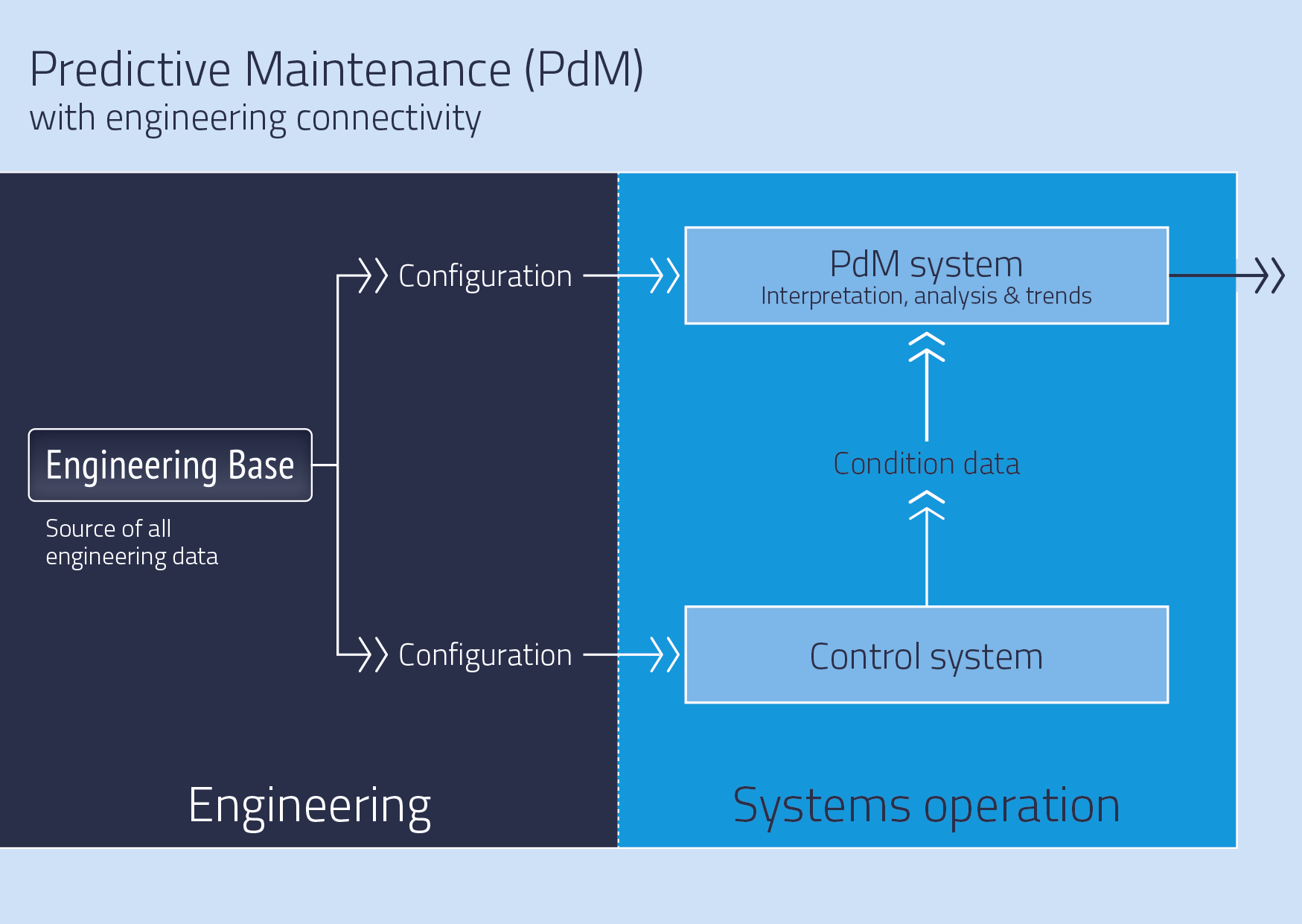 Plant failures are expensive. Unforeseen repairs in plant operations always cost far too much time and unplanned downtimes can result in huge losses. On the path to Industry 4.0, with its huge increase in extremely modern and highly demanding plant technology, the significance of efficient and effective maintenance in ensuring operability is still growing considerably.

Predictive maintenance (PdM) is intended to help avoid potential system failures by means of prompt predictions so that costs relating to maintenance, service, and of course downtime are minimized as far as possible. IT-based processes with highly sensitive analysis tools no longer merely record the current conditions, but recognize trends even from minimal changes in measurement data, which can lead to failures, for example. Millions of pieces of data have to be recorded and analysed for this purpose.

Global players such as IBM, blue yonder, sas, Bosch and SAP have developed "Big Data" applications for this field. Yet none of them have exploited the potential of a modern engineering system thus far. This means that PdM has to be "fed" the appropriate engineering information separately either manually or with the aid of laboriously completed lists and different interfaces so that it can correctly interpret the status data that it is continuously receiving from the distributed control system. Since 50,000 signals are far from uncommon in a distributed control system, the effort involved is usually enormous. Without this engineering knowledge, however, even the most intelligent PdM can accomplish nothing with the live measurement data. It must understand that the value x to signal y indicates, for example, a certain pressure on a certain sensor.

In contrast, the system platform Engineering Base (EB) is the only software system that has been able to intelligently network engineering with a PdM tool due to its architecture. EB can be closely linked to high-performance analysis applications for PdM.

EB can display abstract objects known as "interpretations", such as measurement types for pressure measurement in a feed pipe, which are classified under a sensor. Without a database-driven structure, such information would be impossible to map because it does not appear in circuit diagrams or P&IDs.

The engineering platform EB is the source of all technical data of a plant, and also of all limiting or critical values, parameters and units of measurement, as well as their transfer characteristics. These specifications can also be used at the same time by the distributed control system and PdM configuration. The predictive maintenance system is thus able to clearly interpret the live data from the distributed control system without any additional effort. EB's virtual plant model is thus the "single source of truth" for the PdM process.

Once specified in the engineering, EB first transmits the list of all possible tags as a basis to the PdM system. This includes information about the type of measurement, for example whether it involves pressure, temperature or level sensors, and whether they record bar, Celsius/Fahrenheit or other units. The textual meanings of the condition values including their language translations are also transmitted, along with the identification data and relationships to plants, components and signals as well as the configuration of the transmission behaviour. The distributed control system receives the relevant configuration data from EB.

Thus the platform is not only the "single source of truth" of all technical data of a plant, but also its transfer characteristic.

However, the decisive factor is the configuration of the data transfer from the distributed control system to the PdM. On the one hand, EB informs the distributed control system about which tags in the operation it should actually send data to the PdM – because not all of them are relevant for predictive maintenance. On the other hand, the experts also use the engineering platform to configure how often and how precisely these reports should be made.

If the distributed control system sends live data from the operation to the PdM, the data is prepared there for use by the evaluation logic. With the aid of this logic, the PdM system interprets live data from the plant based on the engineering data defined by EB and can analyse it. A further application then displays potential maintenance cases to the PdM user.

The engineering data can be transmitted to the PdM system both on-demand and automatically in a time-controlled manner. The engineer responsible automatically receives an e-mail immediately in relation to each transmission of data. The e-mail contains a summary and details of globally specified data, plant data from EB projects, parameters (e.g. temperature) and transmission units (e.g. °C). The data is transmitted via EB's modern Web Communication Server, thus it can take place at any time - even when applications are not open. This completely guarantees that data is always up-to-date.

In practice, EB's link to PdM has already been deployed very successfully by the large globally-active compressor manufacturer Kaeser. It uses SAP's PdM system based on HANA technology. The plant engineer expects to achieve a saving of some 50% of its worldwide maintenance costs. According to Kaeser, it would not be possible to offer PdM as such a good service to its customers without EB's database concept.

Due to the highly flexible and efficient EB database, based on the widely-used Microsoft SQL Server, links to further predictive maintenance tools are possible at any time.

Plant operators and their customers, who expect timely delivery of the best possible quality, benefit in equal measure through improved plant availability and more efficient maintenance processes. Wind farms that are sometimes hard to access or are widely dispersed are a typical example of a case in which PdM is especially valuable. Also, for example, mobile "plants" where the safety of people must be guaranteed, as in rail systems, lifts or buses, reap particular benefits.

EB's link between engineering and PdM really meets the requirements of Big Data for the first time. It saves the massive effort that would be necessary if the PdM system were unable to consistently link the live data from the plant with the engineering data.

The future of mobile engineering: "Apps increase the value of the data"